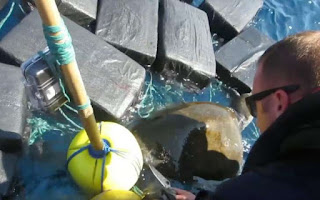 The Telegraph is reporting that the US Coast Guard found a sea turtle trapped with 800 kilos of cocaine floating in the ocean. "The struggling marine reptile was rescued during a 68-day counter drug patrol by the US Armed Forces branch in the Eastern Pacific along the Central American coast. By the end of the operation, the crew had seized a total of 6,755 kilos (14,800lb) of cocaine, 14 pounds of marijuana and arrested 24 suspected smugglers. The seizure was part of Operation Martillo, an international operation involving 18 countries targeting criminal organisations moving illicit cargo."

So what happens after all that cocaine is seized? The CIA take it to Florida to be "destroyed."