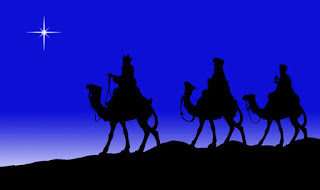 There was an interesting article in the paper recently about how $7.5 million laundered through a BC Casino ended up in China. Ties to organized crime is something we normally associate with Capitalism but evidently corruption goes both ways. The Communist politicians in China are the richest in the world. That shows you that Communism is a lie. It was funded by the Rothschilds and big corporations. It has nothing to do with social justice. It is all about greed.

However, greed is the universal sin that infects every person, religion, trade union and political party under the sun. The reason the Communist Manifesto is so flawed is that its founding premise is false making it's method of operation a fraud. My father always used to say that Communism works in theory but doesn't work in practice. That's because it's based on lies.

North Korea calls itself the Democratic People's Republic of Korea. That name is a lie because there is absolutely no democracy in North Korea. None whatsoever.

The Communist Manifesto claims that the history of all conflict boils down to a class struggle. Eliminate the classes and differences between people and you eliminate the conflict and establish world peace. Wrong. The history of all conflict isn't the result of class struggle it's the result of greed. There's a difference. One group wants to have power over another group so it can enslave and exploit them. It all boils down to people who don't want to work but want it all.

Adam was told by the sweat of thy brow thou shalt labour all the days of thy life and in this life ye shall have joy. The ability to work is a blessing that came as the result of the fall. Without work, there is no joy. Hard work is the means of all accomplishment. We must work to accomplish any goal in life. People fall for get rich quick schemes because they want it all without having to work for it. They want to be able to sit on their ass and have other people do all the work for them. 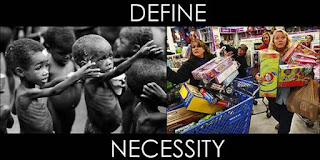 I told everyone I wasn't celebrating Christmas this year and I meant it. No, I haven't become Jehovah's Witness. I believe voting in elections is a moral duty and it's the devil that wants all the good people to boycott elections so he can do whatever he wants. I'm just sick of all the noise and want to enjoy the sound of silence this year. I also want to catch up on bills.

I used to know a German family that would make their own Christmas gifts. I have to admit hand knitted socks and scarves are the warmest thing around in winter. It's all the greed my brain can't process. There's a commercial on TV about two women fighting over the prestige of having bought the best or most expensive gift. That is totally messed up. Unfortunately, it's nothing new. Those are the wrong kind of Christmas traditions to develop. It misses the whole point.

Christmas is for kids. There's nothing more rewarding than seeing a child's face light up when you found the perfect gift. A small toy they really enjoy. Childhood is fleeting and goes way too fast. Take lots of pictures and enjoy it while you can. Just remember there's a lot more to Christmas than meets the eye. Tal Zentmeyer on Christmas Peace. Bring it. 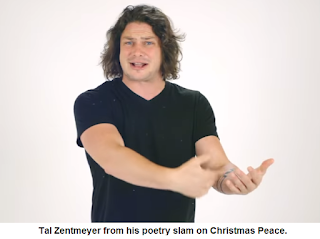