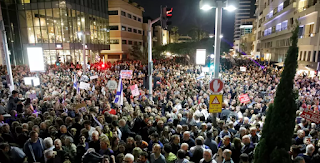 The Jerusalem Post is reporting that "Thousands of protesters gathered on Tel Aviv’s Rothschild Boulevard on Saturday night to demand transparency and accountability in government, in response to recent legislation banning the police from recommending indictments against elected officials." Obviously the guy has lost his mind.

These people have a legitimate grievance. What would the world say if the army used live ammunition on these protesters and tried to impose a 6 PM curfew to prevent them from voicing their concerns? Somehow I think the world would be outraged. So why doesn't anyone care about what's going on in Honduras? "When you have done it to one of the least of these, you have done it unto me."