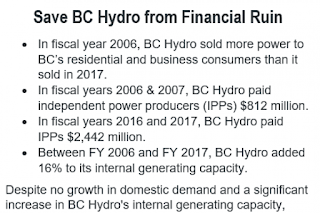 Norm Farrell is a local blogger who has done a great job covering the corruption at BC Hydro which is heading us towards a similar situation that caused the Greek Financial crisis. Norm is one of the few champions of justice that confronts the real problem at BC Hydro - the Independent Power Producers. They are private companies that sell power to the public company at above market rates. This is a GoFundme page Norm has set up to raise money for advertising to raise public awareness about the tax fraud.