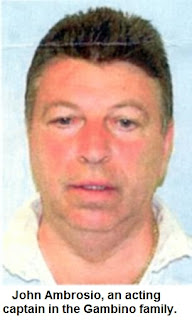 The New York Daily News is reporting that "Several Long Island mobsters were busted Tuesday on a host of criminal charges including loan sharking, drug dealing and running illegal casinos, authorities said." The US Department of Justice is reporting that "The defendants are John “Johnny Boy” Ambrosio, an acting captain in the Gambino family, Frank “Frankie Boy” Salerno, a soldier in the Bonanno family, and Thomas Anzaone, Alessandro “Sandro” Damelio, Joseph Durso, Anthony Rodolico and Anthony Saladino, associates of the Gambino family."

The Daily Mail is reporting that the Bonnano family and the Gambino family "are both part of La Cosa Nostra, a famed five-family criminal organisation which allows each family to co-exist and operate harmoniously. Between February and June 2016, one undercover agent claims to have bought almost a kilogram from them in 12 different sales."

Posted by Dennis Watson at 2:29 PM