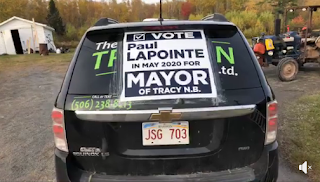 CBC is reporting that "Paul LaPointe has same name as man linked with armed standoff in community on Thursday." OK this is shady. Here's a guy running for mayor of Tracy, New Brunswick that has a lot of bikers and criminals as friends on Facebook trashing the RCMP for questioning him about a nearby shooting. Among a ship load of bikers, one of his fb friends is Jesse Logue who is tied to the recent double homicide in Fredericton.

In fact he even wrote a book last year From Cell to Sanity a memoir about how because of his bi-polar disorder he lost relationships, lived a life of extremes and cycled in and out of jail as a result of his bizarre behaviour. Sounds like he still needs some more time with Dr Phil. 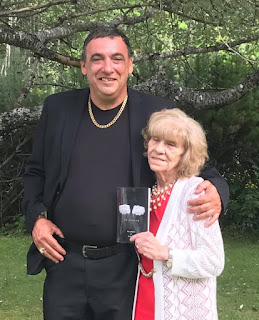 CBC is reporting that "A 53-year-old man who was involved in a nearly 11-hour standoff with police in Tracy last week has been denied bail and is facing a slew of new charges. Paul LaPointe is facing a dozen charges that include threats, assaults and firearm offences. On Oct. 17, LaPointe was released following a standoff at 4491 Heritage Dr. He was arrested again the next day and appeared in Burton provincial court on Thursday for a bail hearing. He is now facing 12 charges, 11 of which are indictable."

"The charges include: three counts of assault, three counts of uttering threats to cause death to someone, and discharging a firearm — a shotgun — with the intent to wound someone. He's also charged with discharging a firearm into or at a place knowing that, or being reckless as to whether another person was present in that place. In addition, LaPointe faces charges of possessing a firearm without having a licence to do so, possessing firearms while he was prohibited from doing so, resisting a peace officer and uttering threats to kill an animal."