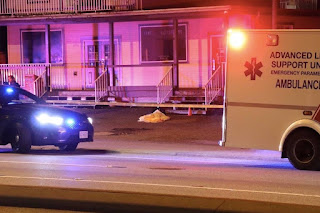 The Peace Arch News is reporting that "One man has been arrested after another man was fatally assaulted in Surrey’s Clayton Heights overnight. Surrey RCMP responded to a report of a suspicious death at a gas station in the 18300-block of Fraser Highway at around 4:30 a.m., according to a statement by Const. Richard Wright. First responders attempted to revive a man, 47, but he was pronounced dead at the scene."

“Police believe the two men were known to each other and that there is no ongoing concern for public safety at this time,” Wright said. “There is no indication that this incident is related to gang involvement.”

The fatal shooting at a gas station in Clayton Heights September 28th was at the 18600-block of Fraser Highway. 3 blocks down the street. Police still haven't named that victim. Or the the name of the victim on the south Surrey shooting. I guess the public is going to have to sue the RCMP for information because Dwayne McDonald is going to snap if the public keeps pointing out they aren't doing their job or fulfilling their duty to inform the public. That's why they're being replaced.