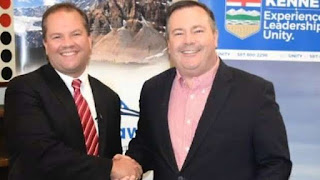 CBC is reporting that "Alberta Premier Jason Kenney and his United Conservative Party are denying any wrongdoing by his campaign during the party's leadership race, after a CBC News investigation surfaced fresh allegations including an insider who says he called members to obtain their passcodes and handed them over to others to vote."

"The investigation published Friday lifted the veil on what happened inside voting kiosks set up by the Kenney campaign, as Stephen Harper's former top lieutenant vied with chief rival Brian Jean to lead the UCP after the province's Progressive Conservative and Wildrose parties merged."

"One insider alleged to CBC News that he phoned members to obtain personal identification numbers (PINs) needed to vote online or by phone, then passed them to Tim Uppal, a former Conservative MP and current federal candidate who played a key role on Kenney's leadership campaign. The volunteer says Uppal shared the PINs with other volunteers, who used them to cast votes for Kenney — a violation of party rules for the three-day vote."

"The insider's account is part of a larger story about allegations of wrongdoing by the team behind Alberta's premier that one longtime conservative operative says is the focus of an ongoing RCMP investigation and which one expert says undermines the credibility of Canada's democratic system. The Kenney campaign is also accused of using fraudulent emails to cast ballots and of collaborating with another leadership contender who attacked Jean in a kamikaze campaign."

AYFKM? Jason Kenney is an a*shole. Ditch him. The Conservatives were elected, not him.

Raging Rachel is no better. She's why the Conservative were elected.

Brian Jean is a good man. Jason Kenney is NOT.