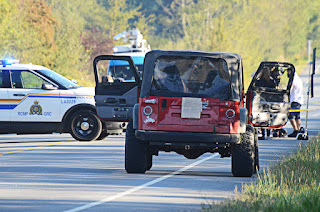 Global is reporting that "Travis MacPhail pleaded guilty to two counts of second-degree murder for the deaths of Brandy Petrie and Avery Levely-Flesher, who were found suffering from gunshot wounds on Sept. 1, 2017. Petrie, a 34-year-old Burnaby woman, and 20-year-old Levely-Flesher of Surrey died of their injuries shortly after they were found in the area of 62A Crescent and 64 Avenue around 5:30 a.m."

"MacPhail was charged in connection to their deaths on Sept. 5, 2017. He was also charged with possession of a prohibited or restricted firearm with ammunition, uttering threats and aggravated sexual assault. The Integrated Homicide Investigation Team (IHIT) said MacPhail's plea was entered Oct. 8, 2019. Sentencing has been scheduled for February 2020."