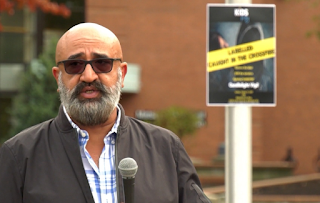 The Abbotsford News is reporting that "More than 200 people came out for a candlelight vigil in Abbotsford on Sunday for families to talk about and grieve the loss of their loved ones to gangs. The event, titled Labelled: Caught in the Crossfire, was held at civic plaza and was organized by Kids Play Foundation. Among the speakers was Ken Dosanjh, the brother of Ron and Jimmy Dosanjh, who were both killed in gang-related killings within two months of each other in 1994."

CTV posted a video clip from the vigil. KidsPlay is going good work. When everyone else is talking about doing something they are out there doing it. The RCMP in Surrey don't want to let them speak in schools because they are nonprofit and the RCMP get paid overtime to talk in schools. If they let the non profits speak, they miss the overtime.