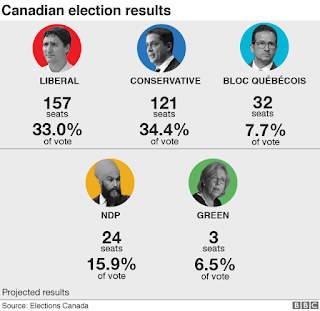 My daughter summed up the election paradox well. She had studied the various candidates and came to the conclusion that each candidate said some things she agreed with and other things she disagreed with. I think that's how the majority of Canadians felt.

It's amusing how the Main Stream Media spins things. They claim 63% of people want Scheer to step down as leader. Yeah? 63% of who? The people who didn't vote for him? He gained 26 seats and won the popularity vote. Still want pro rep now? If we had pro rep Scheer would now be Prime Minister. Jagmeet lost 15 seats and the NDP's popularity vote dropped from 19.7% to 15.9%. Yet the MSM applauds Jamgeet on a job well done. Why is that? Why is the MSM for Jagmeet and against Scheer? Because the MSM promotes the Corporate agenda and Jagmet was promoting the Pharmaceutical fraud. Free heroin for everyone was the ultimate end game of the legalization of all drugs and that is what organized crime in the pharmaceutical world want.

Scheer made the most gains except for the Bloq who took Quebec back from the NDP. So what happened in Quebec? We lost Thomas Mulcair. This is the beauty of Canada. No political party is going to gain a majority government without Quebec. Quebec in a sense has a veto as does Ontario. Since Quebec and Ontario have the largest population, they rightfully have the most seats and most of the election is decided by them. Alberta is just sour grapes. Everyone is sick of listening to Alberta. Airlift your oil to China. It's time to try something new.

Andrew Scheer did great. He should be kept on as leader for the duration. However, if the Conservatives ever want to return to power, they are going to need a candidate from Quebec or at least someone who can speak French properly. Jason Kenny can speak French but Quebec doesn't trust him for good reason. Raging Rachel launched a trade war with BC and Quebec. Then Jason Kenny became full born a*shole totally pissing off both provinces. If Jason Kenny took over as leader of the Conservatives I would drop my support in a heartbeat.

The Conservatives would instantly lose the gains Scheer made in BC and they wouldn't have a hope in hell of making any ground in Quebec. The French aren't stupid. When you f*ck them over they don't forget about it. They remember. Jason Kenny is toast federally.

Andrew Scheer should lead the opposition for the duration but if the Conservatives want to take the next election they need to recruit a leader from Quebec even Thomas Mulcair. I kid you not. If Preston Manning was willing to merge with Mulroneyism, the very entity the Reform Party was created to oppose, just to get elected, then why not merge with a Quebecer who believes in balanced budgets? That would win the day.

How do you think Brian Mulroney got elected? He was from Quebec and he could speak French. If you can't speak French, Quebec doesn't trust you and feel alienated. If you include Quebec, they will take you over the top. Mark my word. Together we are strong. Liberté, égalité, fraternité. 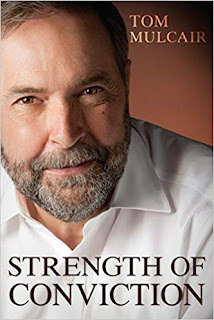