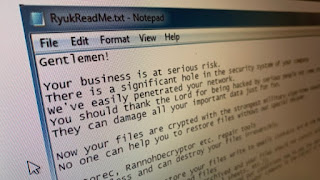 BBC is reporting that "When malicious hackers disable your business and demand a ransom, should you pay up? Many firms do out of desperation, turning to intermediaries to help broker the deal." This is what happened to Norsk Hydro, a global aluminium producer.

"When they eventually launched their ransomware attack, it was devastating - 22,000 computers were hit across 170 different sites in 40 different countries. Chief information officer Jo De Vliegher reopens the ransom note that appeared on computers all over the company. It read: 'Your files have been encrypted with the strongest military algorithms... without our special decoder it is impossible to restore the data.'"

This also happened to the city of Strathford, Ontario on April 14 2019.

CBC is reporting that it also happened to 3 Ontario hospitals this year.

Do ya think it's the same Agency committing all those attacks?

I don't have any money to pay a ransom. I'd just throw my computer in the garbage and post from the library like I did every other time my computer was hacked with a military grade intrusion.