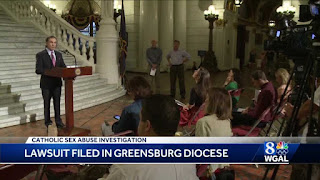 The Vancouver Sun is reporting that "A lawyer for the corporate entity that is the Roman Catholic Bishop of the Diocese of Kamloops admits that his client is vicariously liable for sex assaults committed by a priest more than 40 years ago."

There are three issues on the table. 1) Yet another case of a priest committing sexual abuse. 2) The legal liability of the Church and 3) The concept of a corporate entity being sued.

Kamloops this Week is reporting that "Rosemary Anderson, who was 26 years old at the time of the alleged incidents said Molon sexually assaulted her two to three times a week over a period of months, for a total of between 70 and 100 times. Anderson said she went to confession many times with another priest and described what had happened with Molon, and eventually went to Bishop Adam Exner after Molon suggested they marry one another. When she went to see Exner, who later became archbishop of Vancouver, he asked her if she was having an affair with another priest, Anderson said."

Although this particular case doesn't involve children, the concept of a lawyer for the corporate entity that is the Roman Catholic Bishop of the Diocese of Kamloops is concerning.

The New York Times is reporting that "The Rochester diocese’s move has left many who were promised justice under New York’s Child Victims Act feeling betrayed."

"His lawsuit and dozens of others against the diocese were supposed to play out in civil court, with the expectation that victims would learn what church leaders knew and did. But the diocese sidestepped all of that by declaring bankruptcy."

This brings us back to the documentary called the Corporation. "If you don't want to be legally liable for your actions, form a corporation."

Trib Live reported that "A woman is suing the Catholic Diocese of Greensburg, claiming she was repeatedly raped by a priest in her Seward parish in 1972 after the priest was transferred there because of earlier abuse allegations. The woman, identified only as Jane Doe, said she suffered horrific sexual abuse at the hands of the late Rev. George Pierce starting in 1973 or 1974, when she was about 11, and continuing until 1978."

"The lawsuit is the most recent allegation to surface against the late clergyman, who was singled out in an August 2018 grand jury report detailing abuse allegations against 301 Pennsylvania priests charged with abusing more than 1,000 children over several decades."

"Doe’s attorney, Altoona lawyer Richard Serbin of Janet, Janet & Suggs, said Doe, who is now in her 50s, initially applied to the Greensburg diocese’s compensation fund. She opted to pursue a lawsuit instead after she was offered $88,100 and informed that was the maximum the church would be offering anyone."

Legal liability is dependent on finding out what church leaders knew and did. Hiding that information by letting a manufactured corporation file for bankruptcy is morally wrong. It fails natural justice. Human beings are accountable for what they do. In this life and in the next.

If the Rochester diocese files for bankruptcy then the victims are going to have to sue the Catholic Church of North America and the Vatican in Rome which is the head office. It's like sexual harassment in the RCMP. The only way anything is going to get done about it is if they are held financial liable. Until that happens, nothing will change.

Posted by Dennis Watson at 3:13 AM