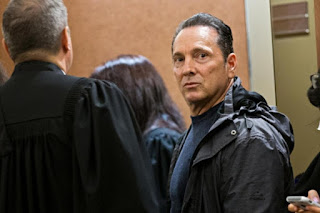 CTV is reporting that "Andrea (Andrew) Scoppa, reputedly one of the Montreal Mafia's most influential leaders, was found dead Monday in a parking lot in Pierrefonds-Roxboro, in the West Island. He had been shot and was lying "in a pool of his own blood" in front of a store at 4744 Saint-Jean Boulevard, according to a Montreal police source. Scoppa’s death was confirmed on the scene. Andrew Scoppa was the brother of Salvatore Scoppa, who was killed in front of dozens of witnesses in the lobby of the Sheraton Hotel in Laval last May."

"The Scoppa brothers, who are reputed to have been key players in the Montreal Mafia during the dismantling of the Rizzuto family, are believed to be linked to the murders of four people in 2016, in which four people were arrested last week. Provincial police said last week they had no doubt that Salvatore Scoppa's killing was in response to the four 2016 slayings."