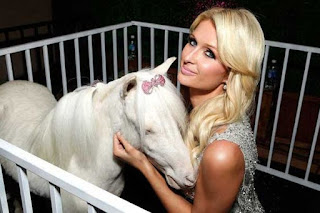 The Fake Stream Media is reporting that Paris Hilton is leading a protest at a school for juvies she attended in the /90's. She wants to close the school down even though it's under new management. Sounds more like she wants more attention for her new pity party.

CTV is reporting that "The school aims to help youth who have struggled in typical home and school environments, some of whom are dealing with drug addiction or acting out violently, according to the website." They were misbehaving at home and had to be sent somewhere else.

It's quite possible the previous administration could have been heavy handed but it is also possible these spoon in the mouth yuppies could claim that cutting off cell phone use or video games for misbehavior was torture. Raising kids without consequences is child abuse.

One of the biggest problems in our society is the failure to teach youth consequences. I'm not talking about beating the kids. I'm talking about teaching boundaries and consequences for unacceptable behaviour. Logical consequences. These kids were sent there because they were acting inappropriately at home. That makes their pity party suspect. It's kinda Dr Phil.