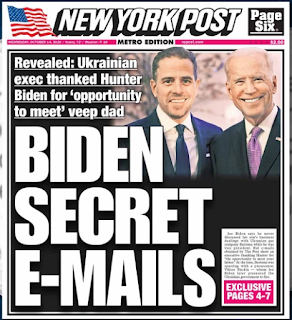 The New york Post is reporting that "Hunter Biden introduced his father, then-Vice President Joe Biden, to a top executive at a Ukrainian energy firm less than a year before the elder Biden pressured government officials in Ukraine into firing a prosecutor who was investigating the company, according to emails obtained by The Post." Give it up for NYC yo.

Rebel Media is reporting that "Twitter has locked out the New York Post and prohibited users from sharing a link to the Post’s article implicating Joe Biden in a corruption scheme with Ukrainian energy conglomerate Burisma. On Wednesday, the Post published leaked emails obtained from a laptop allegedly belonging to Hunter Biden containing correspondence between the younger Biden and a top executive at Burisma. Joe Biden, who has repeatedly denied having any knowledge of his son’s business dealings, is shown to have been introduced to and met with executives at the Ukrainian company. The trove of data in the laptop also included compromising photographs of Hunter Biden appearing to pose with drug paraphernalia."

Strippers and blow yo. "Hunter Biden met and married Kathleen Buhle in 1993. The two divorced in 2017 after a 22-year marriage that produced three daughters. In divorce papers, Kathleen accused her ex of blowing family funds on drugs and prostitutes."

Twitter blocking the New York Post shows you how ridiculously absurd they have become. Joe Biden's Ukrainian scandal is nothing new. What's new is the fact that Joe Biden denied knowing anything about it and the email proves he lied. Again. John Brennan is a professional liar 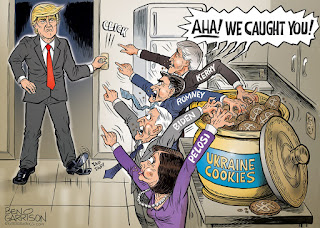 Tierney Real News Network reported that "Romney, Kerry, Biden, McCain, Pelosi, Schiff, Mueller, Soros, Brennan, Obama and Clinton are all tied to Communist China's sketchy Ukraine money laundering deals. Paul Pelosi Jr. was an executive of a gas industry company, Viscoil, that did business in Ukraine – and his mother Nancy Pelosi was featured in one of the company’s promotional videos. V.P. Biden bragged on camera that he was able to force the former Ukraine President to fire a prosecutor who was investigating his son, Hunter, by threatening to withhold $1 BILLION in U.S. loans from Ukraine – all with approval from Obama.

The Hill is reporting that "A private equity firm managed by the son of former Vice President Joe Biden struck a deal with China's state-owned bank in 2013 at the same time that Biden was in the country to meet with Chinese President Xi Jinping. Hunter Biden, who arrived in China aboard Air Force Two alongside the vice president and the rest of the U.S. delegation, was at the time in control of Rosemont Seneca Partners LLC., a private equity firm that would go on to strike a deal with the state-owned Bank of China to create a $1 billion joint investment fund." 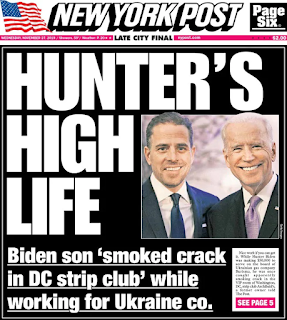 Page Six is reporitng that "The woman suing Hunter Biden for paternity was a stripper at a Washington, DC, club he frequented around the time he was dating his brother’s widow, sources told The Post. Biden was repeatedly seen at the Mpire Club in the capital’s historic Dupont Circle neighborhood - where Lunden Alexis Roberts, the mother of his alleged love child, worked under the stage name Dallas, the sources said.Several Mpire workers said they recognized Roberts, 28, who last week filed court papers that say DNA testing proved Hunter, 49, fathered the child she gave birth to in August 2018." Hunter was kicked out of the navy for cocaine. 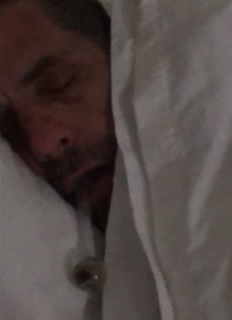 On a matter of Hunter's personal privilege, I will point out the obvious. That is not a crack pipe, it is a crystal meth pipe. Get it right will ya. However, he is sleeping or passed out so it is remotely possible whoever took the picture put the pipe in his mouth for the picture. Yet the evidence of him spending money on drugs and prostitutes would imply that it could in fact be legit.