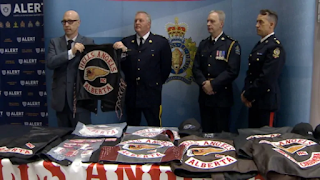 The National Post is reporting that "The Alberta government has selected PriceWaterhouseCoopers to study whether or not Alberta should get its own provincial police force, joining other provinces such as Ontario and Quebec, and possibly scrapping its contract with the Royal Canadian Mounted Police."

This is why we need to reject the BC Liberals. The Alberta Gang Task force isn't compromised like the BC Gang task force is. They actually make drug busts in Alberta. BC does not.