Hells Angels busted in Oz with meth, cocaine and GHB 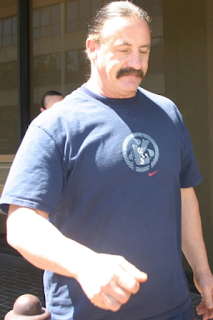 TBM Nation is reporting that "Two senior bikie gang members arrested in Melbourne will be deported to New Zealand after a nationwide crackdown on the Hells Angels. The pair were among 24 people charged following 28 raids across Australia, police revealed on Thursday. The search warrants were conducted earlier this week and allegedly found firearms, ammunition, cash and drugs, including meth, cocaine, GHB and steroids."

The Sydney Morning Herald named one of the pair to be Felix Lyle, head of the Sydney chapter. "Not that Lyle was often seen on a bike. Before he went to prison, his preferred mode of transport was being chauffeured around in his bright red Bentley." Speaking of Australian Hells Angels and crstal meth, whatever happened to the toy boy lover Errol Gildea? I haven't heard where that warm brother is hiding out lately. He's taken the Hells Angels sex trade into a whole new level.

Meanwhile back on the ranch, TBM is also reporting that there was a huge crystal meth bust along the US Mexico border. Operation Fast and Furious never stopped. The beat goes on.