Senior shot during Surrey break in 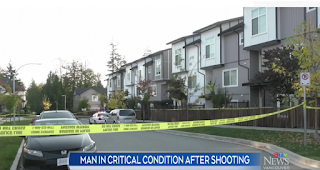 Global is reporting that "A 67-year-old man is in hospital with critical injuries after a shooting in Surrey’s Newton neighbourhood early Saturday morning. Surrey RCMP says it was called to a break-and-enter and shooting in the 5800-block of 129 Street just before 3 a.m. The victim, who is not known to police, was rushed to hospital, where his condition was stabilized, said police."

This brings us back to that case where a Surrey senior was attacked in their own home with an axe by a crack addict looking to steal money to buy more drugs. This is why Vancouver's drug consumption site in Yaletown is the epitome of evil. Wherever you let drugs be sold and used openly, violent crime in that area increases exponentially. Lawlessness leads to injustice.