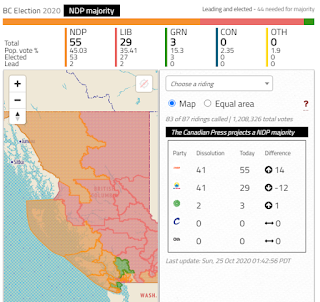 The Vancovuer Sun is reporting that "Preliminary results at press time estimated the NDP was elected or winning in 55 seats, the Liberals 29, and the Greens three, but not all polls had been counted, and some seats had razor thin-margins. In addition, a record 500,000 British Columbians voted by mail during this pandemic election, and those ballots won’t be counted for at least 13 days — so how they will change the final outcome won’t be known for some time." 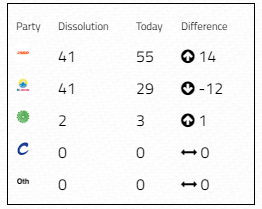 I didn't like the snap election. I thought that was sleazy. However, the BC Liberals pulling a Botox Betty and pledging to screw Surrey over its Municipal police force was a bad move. The NDP's decision to proceed with the Natural Gas pipeline to Kitimat was a good thing. Natural gas is clean burning. Industrial coal is not. We need to rise up against fake environmentalism.

I don't know how much the Green party were trying to stop cleaner energy projects but if they were opposing that, then giving the NDP a majority to proceed with those without them was a good thing. Andrew Wilkinson won his seat soundly. I endorsed him over Botox Betty for obvious reasons. He is competent and capable.

I do not trust Bonnie Henry and Adrian Dix at all. Yet look at Doug Ford. Destroying the economy more than any terrorist over the fraudulent misrepresentation of asymptomatic test results is evil. That is what we have to face. BC has done better than some of the other provinces with regards to preserving civil liberty during the Covid fraud but we can do better. Much better. Bonnie Henry is the soft sell for the World Health Organization, which is not lead by a medical doctor, it is led by a leader of a violent Communist paramilitary organization. That is the truth.

The NDP's pledge to attain zero carbon emissions is part of the UN's Agenda 21 which the Oath Keepers have exposed. Banning natural gas in home heating is not a step forward for the environment. Burning industrial coal to generate electricity does not represent zero carbon emissions. It represents a toxic carbon nightmare. Banning cars and motorcycles is a direct attack on individual liberty and must be opposed. For now, this election represents a step forward but Buyer Beware. The fake environmentalists are trying to take us down a road to East Berlin.

Posted by Dennis Watson at 1:41 AM