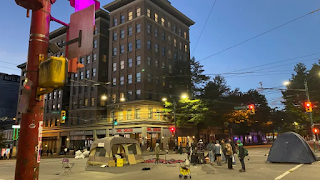 This is the problem. Catering to lawlessness. This will destroy our country faster than any forgein invasion. The Communist Broadcasting Corporation is reporting that "About two dozen people occupied a Downtown Eastside intersection at Vancouver's Main and Hastings streets on Wednesday in opposition to police action which they say unfairly targets homeless people."

Now I'm not going to blame Kennedy Stewart for this. He is trying to fix the problem. You know it's bad when the NDP admit it's bad. There are no woman's rights in that rape camp. After they were evicted from Oppenheimer park, they refused housing and simply moved to Strathcona park to start terrorising the people who lived there with crime and violence.

The police started fulfilling their legal duty to taxpayers and started enforcing the law. The thieves and rapists throw a temper tanturm and set their tents up in the intersection of Main and Hastings on public display for the world to see their defiant lawlessness. Again I say, the police have a moral and legal obligation to uphold the law. The road must be cleared. The illegal blockade violates our mobility rights in the Canadian Charter of Rights. The public has the legal right to travel down a public road and the police have a legal obligation to protect that right. People have the right to protest but they do not have the right to break the law.

We need to enforce the law because right now we are not. Right now the CBC is promoting Rape because that is the end game of their Communist propaganda. Well it's not their end game it's just their means to an end. The CBC and the Mainstream Media are promoting lawlessness to create anarchy and disorder so the communists can come in and create order amidst the chaos. Thier order. You can rest assure, once the Communists take over, they will fund their police.

This is an election issue. Andrew Wilkinson states that the Liberals will enforce the law and confront these rape camps that bring crime, drugs and violence to our communities and so they should. This is exactly how Bill de Blassio has destroyed New York City. This is why people are leaving New York. His refusal to enforce the law has brought crime and violence back to the Big Apple. Thankfully patriots like Curtis Sliwa are willing to enforce the law and bring order and prosperity back to the City. We need to do the same here. It's a no brainer.