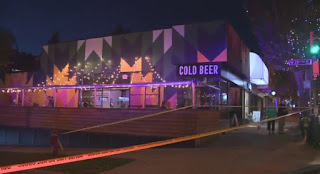 Global is reporting that "One man is in hospital with non-life-threatening injuries following a brazen daylight shooting outside an eatery in Vancouver’s Dunbar neighbourhood late Tuesday afternoon. Vancouver Police Const. Tania Visintin told Global News a man, woman and child were exiting a restaurant near West 29 Avenue and Dunbar Street just after 5:30 p.m., when possibly two suspects began firing at them."

“The suspects fled the area in a vehicle,” said Visintin, “but were found by police and arrested. It is unknown at this time if it was targeted. “The one male victim (the only victim with an injury) has been taken to hospital for non-life-threatening injuries.”

CBC is reporting that "Two men have been charged after a man carrying a baby was shot outside a restaurant in Vancouver's Dunbar neighbourhood. Police said a 42-year-old Vancouver man was injured in the shooting which happened near West 29th Avenue and Dunbar Street around 5:45 p.m. The man, who was carrying the baby in a car seat, was also with a woman and a three-year-old at the time, police said. Liban Hassan, 35, and Ahmed Ismail, 24, have been charged with attempted murder."