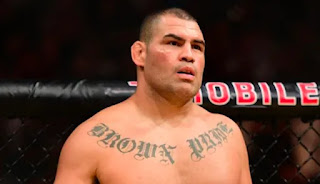 Speaking of the normalization of pedophilia, let's take a look and the Cain Velasquez case and how the media is spinning in in their globalist attempt to justify pedophilia. Cain Velasquez is a former heavyweight UFC champion. He's been charged with attempted murder. He shot at someone who molested his relative. Molested means they are a minor.

Sports Illustrated is reporting that "Velasquez’s relative, who is a minor, reported last week that they were molested by a man at a home daycare. The accused—43-year-old Harry Eugene Goularte—lives at the home where his mother runs a daycare center. According to the criminal complaint obtained by The Post, Goularte was charged with a “felony count of lewd and lascivious act with a child under the age of 14.” Day care implies very young.

The Globalist fake news is going off about how horrible this act of violence was. Not the molesting of a child, but shooting at the perp he was released on bail to reoffend. Now I am not condoning murder but I will point out that Cain is facing more prison time for shooting at a child molester than the actual child molester. That clearing shows there is someone inherently wrong with the judicial system. You know who else committed murder for rape? Moses. Just sayn.

MMA weekly is reporting that Cain "went after the man who was molesting his 4 yr old son."

Our judicial system is broken and our media is deranged. GoFundme removed two pages fundraising for Cain's defence. Once again we see GoFundme's Globalist colors shine through.

Cain is Latino. Latinos do not tolerate that kind of sh*t. That's why I said the false allegations against Dairo Usuga are not believable. The CIA claim Dairo was a child molester. That is a lie. There is not a snowball's chance in Hell Dario would have become the leader of a cartel if he was. The CIA are lying about their own drug dealer because he supported the other candidate in the upcoming presidential election in Colombia. That's the truth.