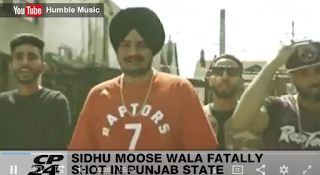 CTV is reporting that "A Punjabi rapper with ties to Toronto has been killed in India, according to multiple reports. Local media reports that Sidhu Moose Wala was shot to death in the state of Punjab on Sunday. No suspect information has been confirmed. The 28-year-old attended Humber College as an international student and recorded many of his music videos in Toronto." 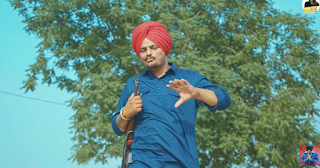 News 18 is reporting that "the daring daylight murder of popular Punjabi singer Sidhu Moose Wala in Mansa on Sunday has brought to the fore gang rivalries that the state has long been plagued with. Punjab Police chief VK Bhawra, at a press conference hours after the shocking murder, said that the killing could have been a fallout of the murder of Youth Akali Dal leader Vicky Madhukhera last August." 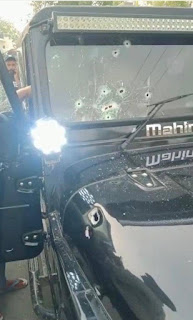 The India Express is reporting that "DGP Bhawra said the killing “appears to be the result of inter-gang rivalry as Moosewala’s manager Shagunpreet Singh name had surfaced in the Vicky Middukhera murder case.”

"DGP Bhawra said police are investigating the alleged role of the Lawrence Bishnoi gang in the killing. On Sunday, hours after Moosewala was killed, Canada-based Goldy Brar, allegedly a member of the Bishnoi gang, put out a Facebook post owning responsibility for the killing and alleging police didn’t act against the singer over Middukhera’s murder."

India Today is reporting that "Goldy Brar, a close associate of Lawrence Bishnoi, has claimed responsibility for the murder of Punjabi singer Sidhu Moose Wala."

Bishnoi gang and the Kaushal gang? I've never heard of them. Until now.

The Times Now is reporting that "Canada-based gangster Goldy Brar aka Satinder Singh is wanted by Indian authorities in multiple criminal cases. A Faridpur court had earlier this month issued an open-ended non-bailable arrest warrant against Brar in connection with the killing of the district Youth Congress president, Gurlal Singh Pehalwan."