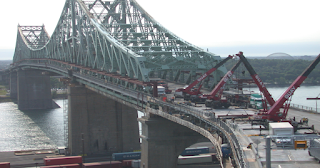 The Toronto Star is reporting that "SNC-Lavalin Inc. says it will pay Quebec nearly $30 million over three years to settle criminal bribery charges stemming from bridge work in Montreal."

"The charges against SNC-Lavalin and SNC-Lavalin International related to events that occurred between 1997 and 2004 in connection with the Jacques Cartier Bridge deck rehabilitation project between Montreal and Longueuil."

OK let me get this right. SNC Sleazebags bribed the government to get the contract to repair a bridge and now they have to pay the government another bribe, I mean fine.

SNC-Lavalin is dirty as f*ck. They are the reason the Site C Dam is so far over budget. They under bid government projects and pay bribes then go way over budget. The dirty politicians keep using them because they give kickbacks to the politicians in the form of campaign contributions. They should not be allowed to bid on the Pattullo bridge replacement or the new tunnel.