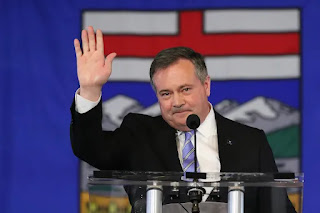 CTV is reporting that "Jason Kenney steps down after 51.4 per cent approval in leadership review." I did have concerns about Jason Kenney when he pulled a Doug Ford during Covid and abandoned Conservative principles in favor of globalism. However, he did make an impressive recovery. I was also disappointed in the tone of Jason Kenney's negotiations with BC over twinning the pipeline. Sadly he repeated raging Rachels defiant arrogance and lost the line as a result. Clearly that needs to be re-examined and renegotiated.

Twinning the pipeline makes sense. More production for domestic consumption is imperative given the current manufactured gas crisis. Our concern was increased traffic in our port for export to China. Raging Rachel said we had no say on the amount of oil that flowed through the pipeline regardless of tanker congestion. She also said if there was a spill, Alberta wouldn't pay a dime for clean-up. That was insanely selfish.

BC needs a say in the amount of oil that flows through the pipeline if our port becomes congested. Increasing domestic production seems far more important. Building pipelines reduce greenhouse gases because it eliminates all the transportation emissions. Bringing the oil in from Russia and Saudi Arabia generates far more emissions than domestic production.

We need to renegotiate a fair deal where Alberta agrees to contribute towards clean up if there is a spin. Being fair is in everyone's best interest. I will also point out that Kenney won the leadership review. Erin O'Toole or Justin Trudeau would not have stepped down in the same scenario unless they were forced to. Just sayn.

BC needs a refinery. That is obvious. If we refined the oil here, we'd send more product overseas with the same number of ships and have plenty for domestic consumption. Petroleum coke isn't radioactive for f*ck's sake. Grind it up and put it in concrete. Hell, we'll put it in asphalt and make our roads with it. This is a problem we can fix if we think outside the box.