Update: Rebel News picked up on the story as well. Nothing on Global.

That is an inappropriate conversation for an adult to have with a child. This curriculum is grooming children for pedophilia. That is where the alphabet soup leads. This wasn't just one creepy pedophile kindergarten teacher. This was a whole bunch of creepy pedophiles who write children's curriculum. We need to protect our children from them not embrace their curriculum.

I have no problem with LGBT - Lesbian, Gay, Bisexual and Transgender. That I can understand and is all encompassing. That is where I draw the line. As soon as you cross over into the Twilight Zone and start pushing the alphabet soup, the end game is to normalize pedophilia. They want to normalize the abnormal. Rob Smith and Blair White agree.

Blair White thinks children should not transition until they are adults and I agree. Another reason Bill Gates is pushing this on kids is to promote his depopulation agenda. If kids do irreparable damage to their reproductive organs, they won't be able to have children. Let kids be kids.

Queer and questioning is redundant. They don't need a separate category. Two spirited nonbinary - STFU. The Hodge Twins ran a video clip of a nonbinary elementary school teacher teaching the kids about his sexual identity. This is the kind of person you want to stay away from your kids. They have no business having those kinds of conversations with children. That is child abuse. 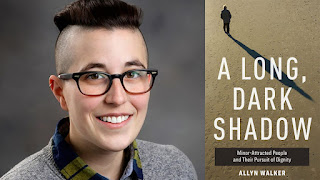