Colombia extradites Dairo Usuga and lies about him

It's election year in Colombia and the false flag attacks have resumed as well as assassination attempts against the president's opponent. So here comes the latest CIA fraud from their drug trafficking state. The New York Post is reporitng that "Accused Colombian drug lord Dairo Antonio Úsuga David, dubbed 'the most dangerous drug trafficker in the world,' was extradited to the US to face federal charges for allegedly running a ruthless and violent international cocaine peddling operation, prosecutors said Thursday. Úsuga David, 50, also known as Otoniel, the suspected leader of Colombia’s feared Clan del Golfo, faces cocaine trafficking and weapons charges, according to the US Attorney’s Office in Brooklyn."

Colombia's President Ivan Duque likened the arrest to that of the drug lord Pablo Escobar who died in 1993. That's an interesting analogy. Pablo Escobar worked for the CIA too just like El Chappo. The president said in his recent campaign speech that this arrest is the biggest blow against drug trafficking in our country this century. This blow is only comparable to the fall of Pablo Escobar in the 1990's." But wait a minute. The arrest of Pablo Escobar did nothing to stop the flow of cocaine out of Colombia. The CIA just switched cartels.

Don't forget Manuel Noriega had ties to the CIA too. Colonel Edward P. Cutolo testified that in Operation Watchtower the planes loaded with cocaine landing in Panama from Bogata were met by Col. Tony Noriega and CIA Agent Edwin Wilson. The CIA made him president.

This arrest is a publicity stunt just like the false positives were. Has the arrest and mistreatment of El Chappo stopped drug trafficking out of Mexico? Nope. The CIA gave up their own guy as a publicity stunt and hired someone else to take his place. Iran Contra never stopped.

Dairo Usuga was first indicted in 2009 on narcotics charges and was accused of providing assistance to a far right paramilitary group. No, that was obviously the CIA. ABC reported that "He is not only the most dangerous drug trafficker in the world, but he is murderer of social leaders, abuser of boys, girls and adolescents, a murderer of policemen," Duque said." That is a lie.

The CIA support far right paramilitaries in Colombia to murder social activists and environmentalists opposing the ruthless foreign mining practices in Colombia. The Cartels aren't doing that, the CIA and the Corporate Communists are.

The claim that he was an abuser of boys, girls and adolescents is a ridiculous lie. That's just another campaign publicity stunt. Latinos are somewhat homophobic and really don't like child molesters. There is no way he would have risen to become the head of a Colombian drug cartel if he was a child molester. That is a bold faced lie.

He was accused of corrupting government officials. Now that is believable. Officials like President Ivan Duque just like in Honduras another hub in the CIA drug trafficking network. 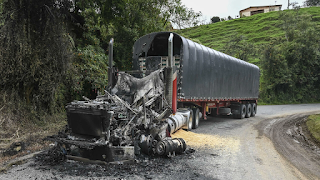 President Ivan Duque claims that the cartel is now rioting in protest of the extradition of their leader but wait a minute. Why would they wait until now after he was extradited and not back in October when he was arrested? Wouldn't it make more sense to go on strike before he was extradited to stop the extradition? Stopping the extradition would have had a much better chance of success than repealing it. Also, look at the picture of the burned out semi.

When rioters burn out a car it's gutted but the metal doesn't melt. What the hell happened to the metal in the picture of the burned out semi trailer? The metal is melted. Locals think the military is doing this just like they did the false positives under the previous president.

Last year President Ivan Duque's popularity plummeted over his Covid response. When he raised taxes after the lock down civilians began to hold mass peaceful protests. President Duque sent in ESMAD to use live ammunition on protesters. The former president of Honduras, who has now been extradited to the US along with his brother for drug charges, did the same thing. Civilians were protesting his corruption and he ordered the police to shoot protesters with live ammunition. Eventually the police started to refuse and went on strike. That's why Colombia's President Ivan Duque sent in ESMAD. ESMAD are CIA trained mercenaries tied to Blackwater.

During last year's protests in Colombia the military started to defend the unarmed civilians when ESMAD started executing them so ESMAD got in a firefight with the military. Locals are consequently suspicions that President Ivan Duque would send in ESMAD to shoot women and children protesting but not the cartel rioting after the extradition of their leader. It's kind of suspicious. It's hard to orchestrate a firefight between ESMAD and themselves unless they kill more civilians and dress them up like cartel members again.

Posted by Dennis Watson at 9:22 AM