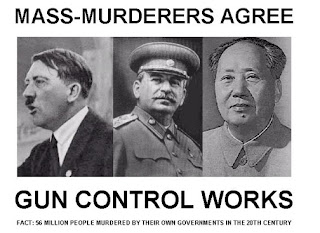 “'(The) national freeze on handguns (would) prevent individuals from bringing newly acquired handguns into Canada and from buying, selling, and transferring handguns within the country,' a press release stated on Monday. In addition to this new legislation, the Government of Canada will require long-gun magazines to be permanently altered so they can never hold more than five rounds and will ban the sale and transfer of large capacity magazines under the Criminal Code.”

All semi automatic rifles were already pinned at five rounds. Banning the sale of handguns for registered owners without a criminal record is new. We all know this has absolutely nothing to do with mass shootings or gang violence. None of those firearms were legally obtained. So this delusion of making people safe is a complete fallacy.

The World Economic Frum own Justin Trudeau and Jagmeet Singh. That is what this is really about. It's just a pathetic power grab before he leaves office.

True North is reporting that "Conservative leadership candidate Pierre Poilievre says a technical malfunction prevented him from voting for a Conservative motion to end travel-related Covid mandates. Members of parliament voted Monday on a motion from Conservative MP Melissa Lantsman to “call on the government to immediately revert to pre-pandemic rules and service levels for travel.” The motion failed 201-112."

"The unofficial tally provided by the House of Commons shows no vote for Poilievre, who has campaigned against Covid mandates throughout the leadership race. In a statement to True North, Poilievre said he did, in fact, attempt to vote for the motion remotely, but it wasn’t logged."

"Fellow MPs and leadership candidates Leslyn Lewis and Scott Aitchison both remotely voted for Lantsman’s motion, the tally shows." We all support ending the travel restictions.

Leslyn Lewis is reporting that "The Liberals have done it again. Put forward more legislation on firearms that won’t actually make people safer. They need to stop playing politics with the safety of our communities. For years law enforcement have been trying to tell them their handgun bans won’t do anything to stop criminals. They refuse to take our border security seriously to keep weapons that are already illegal out of the hands of gangs and other criminals."

"What’s worse, they are doing all of this while actually allowing changes to our laws that will let violent criminals out on the streets sooner. They refuse to challenge the Supreme Court’s ruling that will shorten sentences of the most dangerous murderers and terrorists, but they think it will keep our country safer if they continue to crackdown on law-abiding hunters, farmers and sport shooters. If the Liberals insist on passing more legislation that does nothing to protect Canadians and cracks down further on law-abiding citizens, that is just another piece of legislation that I will get rid of as Prime Minister." Change the government, fix the law.