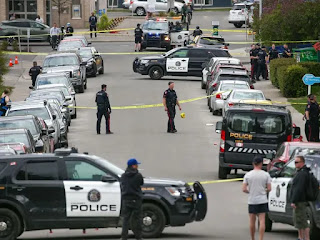 The Calgary Herald is reporting that "Calgary police were investigating a shooting along a busy stretch of 17th Avenue S.W. Monday afternoon that sent a young adult to the hospital. Around 2:55 p.m. EMS responded at the request of police to the 1000 block of 17th Avenue S.W. for reports that a man had been injured in a shooting. Paramedics transported a young adult man about 18 or 19 years old, in serious but stable condition with gunshot wounds, to Foothills Medical Centre." A witness heard a single shot.

"The shooting on 17th Avenue S.W. was the second shooting reported by police on Monday; the first shooting took place in the southeast neighbourhood of Acadia around 11:30 a.m."