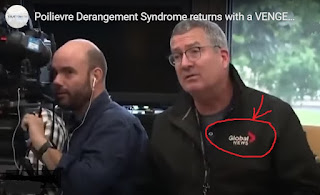 Before I release the big news, let me set the stage. Here's the wind up. True North is reporting that "At Pierre Poilievre’s first appearance before the media as Conservative leader, Global News reporter David Akin started heckling Poilievre before he even began speaking, prompting a retort from Poilievre calling Akin a Liberal heckler.” Pierre Poilievre's comment wasn't the slightest bit extreme. It was an accurate observation. The Global reporter was being a complete dick. He was heckling Pierre like an ANTIFA fanatic wearing a Global News jacket.

True North posted another view of the press conference hijacking on today's episode of Fake News Friday. The fist clip was the screen watching Pierre. You could hear the obnoxious reporter heckling him but you couldn't see him. Today's clip is from another view and you can see the reporter wearing a Global News jacket. Hold that thought. This is why Doug McCallum doesn't do interviews with the Vancouver Sun any more. The Vancouver Sun completely misrepresents him. Global News and the Vancouver Sun are now both owned by Postmedia News.

True north is also reporting that "The owners of Global News are demanding more government funding as its news media company faces imminent financial collapse. According to Blacklock’s Reporter, although Corus Entertainment Inc. has benefited from millions in taxpayer funding, its executive vice president told the Senate transport and communications committee that its news business was on the brink.” Personally I think they're full of sh*t. They just want more free tax dollars to increase their profit margin and their fake news harassment campaign.

Meanwhile back on the ranch, Postmedia Fake News and their shell companies are petitioning Justin Trudeau for more protection from angry citizens who hate their biased fake news. True North keeps referring to the Poilievre Derangement Syndrome because the fake news conglomerate is obsessed with hating and misrepresenting Poilievre just like they misrepresented the convoy and all us us who supported it. In this Tweet Pierre Poilievre makes perfect sense.

Trudeau would rather import 130,000 barrels of overseas oil a day, from places like Saudi Arabia, than make more energy here in Canada.