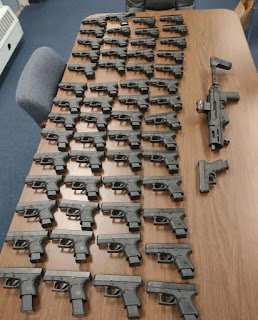 The National Post is reporting that "Most crime guns seized by police in Canada’s largest city this summer came from outside of Canada, according to data gleaned from a Toronto police Twitter account." This is what we've been saying all along.

"Posts made to the @TPSGunsSeized Twitter account shows 77 firearms seized in June, July and August of this year. Of those, 11 of the firearms were non-restricted, 11 were classified as restricted, and 55 were prohibited (including two restricted firearms seized with prohibited magazines.) Prohibited weapons are not legal to buy, sell or possess in Canada, and are smuggled from the United States."

"Looking back further, 84 of 116 firearms posted to @TPSGunsSeized since January were prohibited, 20 restricted and 11 non-restricted. That’s compared to 138 guns seized last year between January and the end of August — 98 of which were prohibited."

Handguns are registered in Canada. In the US they are not. That means all handguns legally obtained in Canada have their serial numbers recorded and are easily traceable by the police. That is why Canadian criminals and gang members do not use them to commit crime. They use illegally obtained guns from the US that haven’t been registered because they are untraceable.