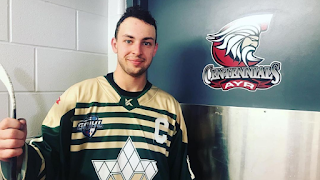 CTV is reporting that "Flags at the community complex in Ayr, Ont. have been lowered to half-mast after the sudden death of a 19-year-old hockey player during a game. In an emailed statement, the Ayr Centennials said they were devastated to announce their captain Eli Palfreyman died on Tuesday. Palfreyman was a three-year veteran of junior hockey, about to enter his fourth year. “Our Centennial’s organization and the community of Ayr are in mourning,” the team said. The Centennials were playing the Boston Jr. Bruins as part of an invitational pre-season tournament on Tuesday evening. According to a member of the Ayr Centennials organization, Palfreyman collapsed in the dressing room during the second intermission."

This is an absolute tragedy. An athletic young man mysteriously drops dead. Doesn't that sound strange? Two years ago it would have but that's become the new normal. Earier this month Dr Leslyn Lewis reported that "The past couple of years have been incredibly traumatizing for so many Canadians. People have lost so much: financial devastation, the loss of so many dreams, losing loved ones. And now at a time when we are hoping that we might finally be returning to normal life, we are being confronted with a new faceless fear: Sudden Adult Death Syndrome.”

"This recently emerged mysterious affliction, manifests itself in healthy young adults who suddenly drop dead. Did you know that in Alberta, the leading cause of death is now “Unknown.”? Meanwhile in Toronto over the past few weeks, six young healthy doctors all died suddenly and with no explanation as to why. We were quickly told that this wasn’t vaccine-related. But that is not good enough. If three young women go missing in your neighbourhood, and the police response was 'Well it is probably not a serial killer', that wouldn’t be good enough. We would demand answers, which is what we should do now." Science examines evidence.

The number of athletes with heart problems since the RNA rollout has skyrocketed.

🎾 WATCH: Dimitrov is forced to retire in his opening match at the Winston Salem Open, U.S. Open series, after experiencing dizziness and shortness of breath in the second set. pic.twitter.com/kPPFMc4mXX