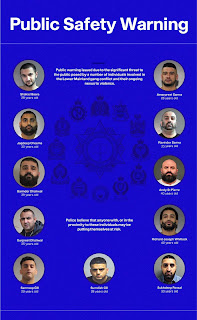 The deplorable CFSEU has issued another warning abut 11 gang members. Shrek made the list. Just like Damion Ryan made the last one. They do this to pretend they are doing something when they obviously are not. They are the root of organized crime in British Colombia because they refuse to enforce the law. The fake news is going off about the fact that 9 of the 11 gang members are Punjabi. They fail to mention that all these gang members work for the Hells Angels and have run afoul of the club and that's why the club wants them dead.

Shrek is a long time Hells Angels associate tied directly to Jamie Bacon. That's a pretty important fact to leave out. The last time they did this they posted a list of people the Hells Angels wanted dead. They threw Damion Ryan in there to pretend they were including Hells Angels associates when they clearly are not. They didn't say they were looking for him because they knew exactly where he was and what crimes he was involved with. Yet they refused to arrest him for his criminal activity because they were protecting him. Damion Ryan was responsible for Anees murder in the DTES while Dr Spin and the CFSEU tried to blame that murder on a rival.

The Manitoba RCMP had to arrest Damion Ryan in Ottawa because the BC CFSEU wouldn't.

The fact that Jamie Bacon is now cooperating with the police means that everyone who works for him has become a target. Before Jamie Bacon crossed over the Hells Angels were killing his rivals in the Red Scorpions so he could pay more tax to the club. Then Jamie Bacon had the audacity to trash talk the club and claim they were stealing from him. If it wasn't for the club he wouldn't have been able to make any money at all. He owned them everything.

They have Hells Angels associates in the Witness Protection who protect the people that ordered the murders so they can arrest the people they hired to commit the murder. They get a bust and look like they are stopping violence when in reality they are a big part of it.

Michael Ross was never in the Witness Protection program directly but his crew ho Morgan Nicholson was. IHIT was sleeping with her too just like they were sleeping with Jamie Bacon's girlfriend and DK's girlfriend along with the other witnesses in the Surrey Six. Morgan told the court everything Michael Ross wanted her to and IHIT didn't care because they got a conviction. 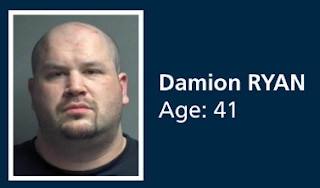 I'll tell you one thing abut the brown kids. They respect their elders. The local white trash like Blaze and Jame Bacon don't. That's because they have no self respect. Money can't buy that.

Posted by Dennis Watson at 2:58 AM