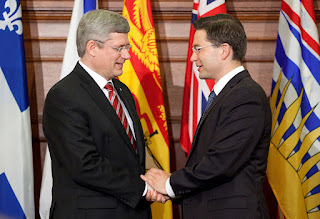 A few weeks ago I got a phone call from Pierre Poilievre's campaign office. They asked me if they could count on my vote for his Conservative leadership bid. I said yes you can. He's my third choice. The conversation kind of ended there. I was being completely honest with them. Originally Jean Charest was my first choice but I was shocked and deeply disappointed he came out so hateful towards the truckers so I ditched him - à dieu.

Update: Maxime Bernier is reporting that "Pierre Poilievre tweeted that we need to send more arms to Ukraine, impose more sanctions on Russia, and welcome more Ukrainian refugees." Perhaps I should take him off the list completely. His Harper colors are showing through.

It's Leslyn Lewis or Maxime Bernier.