Several fatal motorcycle accidents in BC 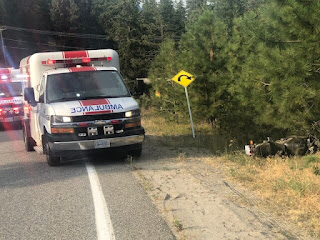 Infotel is reporting that "A 45-year-old Kelowna man was killed in a motorcycle crash in West Kelowna this past weekend. On Saturday, Aug. 20, at about 5:35 p.m., officers responded to a serious single-vehicle motorcycle accident in the 2100 block of Horizon Drive, according to a press release from RCMP. The motorcycle was driven by a 45-year-old Kelowna man who had veered off the road, striking a tree, RCMP said. West Kelowna firefighters were able to recover the driver from the bottom of a steep embankment where he was pronounced dead."

Castanet is reporting that "A witness told Castanet the motorcycle was travelling at a speed that was unsafe to the driver and other people on the road." Single vehicle accident when the roads are dry with perfect visibility makes you wonder. Some people freak when they see me riding my motorcycle in the snow. They claim I'm going to kill someone. My response is no I'm not. If I'm going 30 K on the side of the road on my way to work, I'm not going to kill anyone. The young kid wearing shorts and sneakers weaving in and out of traffic in summer, he's going to kill someone.

Summer time there's a lot more bikes on the road. Out comes the summer soldiers and the sunshine patriots so to speak. Most are responsible. Some are not. I always slow down before a corner and speed up as I come out of the corner so i'm always in control. That's because I also ride when it's wet and icy. I don't brake hard going into a corner because I'm not racing I'm riding.

Some guys hop on and go full throttle on a bigger bike than they can handle and get into accidents. Most accidents occur because other drivers just don't see you. You have to assume no one sees you and drive accordingly. You never ride in someone's blind spot. You're cautious in blind intersections. Yet some things are completely​ out of your control. Like when someone else runs a red light. If you're riding scared, your dangerous but it you're overconfident, you're more dangerous. Be cautious and observant but enjoy the ride. It is what it is.

There's been several other fatal motorcycle accidents recently as well.