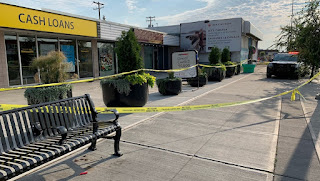 CTV is reporting that "A man was shot and killed early Sunday inside a Calgary restaurant. Police responded to a call of shots fired at 4:40 a.m. inside the Ambassador Restaurant and Bar, at 3504 17 Ave. S.E. in Radisson Heights. They discovered a man in distress, from what appeared to be a gunshot wound. Life-saving measures were enacted, but the man succumbed to his injuries. His age and identity have not been released at this time."
Posted by Dennis Watson at 7:17 PM