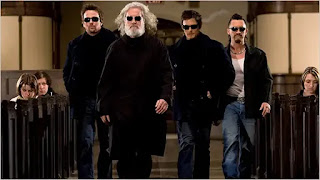 OK this is where I was going with my musical introduction. 6ixaktv is reporting that Francois Gauthier's sentencing has been released. My interpretation of that decision will be very different than his. First and foremost, I will clarify that nowhere in that decision does it state that Francois Gauthier was hired by the UN. The fact that he was from Quebec would imply he was hired by the Hells Angels. I find it somewhat ironic that the judge cited Regina v. Powery-Hooker, 2021 BCSC 2005 in his jurisprudence. That was the decision about the two kids from Edmonton that were hired by the Edmonton Hells Angels to kill Ali to have their debts to the club forgiven.

Ya see the young kids think I'm a crazy old man. Maybe I am. They say times have changed and the bikers day is done. They say the other guys are ready to wipe out the Hells Angels in BC. I say bullsh*t and I'll tell you why. I may be old but, I've seen this all before, so I have.

Now, before I get into who ordered the hit, let me dive into the mechanics of the hit and how that doesn't relate to gun control. This was a professional hit. Francois used a .22 pistol with a silencer and left it at the scene. He left it at the scene because it was an unregistered illegally obtained firearm that the police couldn't trace. We quite often read of professional hits leaving the murder weapon at the scene. That's because it's not traceable and they don't want to be caught in possession of it after the hit. That way they can say not me, not my gun.

Now a .22 is not my weapon of choice. I was at the gun range once and a guy beside me was shooting a .22 rifle for long range target practice. Every time it went off I kept looking over wondering what is that, a pellet gun? It was so quiet it barely made a sound. A .22 with a silencer would be very quiet which means it could be used and the person could leave without causing too much attention. In Ali's murder they used a .40 cal pistol and an AR 15. Young kids who made a big bang and got caught before they were able to get away. We had a spook on here that said the .22 pistol was often a weapon of choice for CIA assignations because it's quiet and acurate.

The sentencing decision explained that Francois had an extensive criminal record. Which means he was not able to legally buy a registered gun in Canada. In 1991, after using a gun for several criminal offenses, Francois was given a 10 year firearm ban which did absolutely nothing to prevent him from committing further criminal acts with firearms.

Kind of like how Donnie McWhirter was under a firearm ban while he committed an additional criminal offense with a firearm. The firearm bans are just pieces of paper criminals don't care about. It only stops them from buying legally obtained registered firearms which is what they don't do for criminal acts. They use unregistered illegal guns for criminal acts.

Blaze is pretty anxious to convince us that the UN hired Francois Gauthier not the Hells Angels. That makes me suspicious. He claimed the same thing about Ali's murder and now we know he lied. Initially Blaze claimed that Cory Vallee killed Jonathan Barber when we all knew it was K-9. K-9 was dead and Blaze couldn't get paid if he blamed the murder on him. Lying is what Blaze does so whatever he claims is suspicious. Now he's paid to lie for the Teletubbies. Blaze is still spamming this blog with bullsh*t. That's what he admitted in court he does.

As I previously said, I don't support an escalation in violence. If the UN did hire Francois, I wouldn't support that. However, I sincerely don't believe they did. I've seen this all before. The Hells Angels lie about all the criminal activity they are involved with. Not all the members, just the ones that are involved with criminal activity. They even lie to other members and attend funerals of people they killed. I corresponded with the wife of a member who claimed the Hells Angels would never have anything to do with someone like Robert Pickton. I thought to myself, does she actually believe that? Dave Pickton was an associate. They had a grow op on sight. Bog Tony ran Piggy's Palace. You can't lie to us because we know. We live here.

Regardless of who now controls the Red Scorpions, we know that the Wolf Pack and the Brother's Keepers are mayor players on the field here. The Wolf Pack is run by Larry Amero and Damion Ryan who are members of the Hells Angels. There's no disputing that.

The Brother's Keepers were hired by the Edmonton Hells Angels along with the Driftwood Crips because they were given jurisdiction over Surrey as a reward for getting Redd Alert to take back all the drug dealers in the DTES from the UN. Then they betrayed Redd Alert because that is what they do. That's their MO. The Brother's Keepers have always had internal strife that was fueled by the Hells Angels in their quest to take them over and maintain control over them. Almost all the Hells Angels members in BC who have been killed, have been killed by the club.

The young kids don't understand the nature of the octopus. The octopus was a term for organized crime an investigative journalist named Danny Casolaro used before he was murdered by a spook. He used that image to explain that the tentacles of organized crime penetrate all levels of government. As soon as you cut one tentacle off, another one grows back to replace it. As soon as you try to shut it down, the whole thing disappears only to resurface elsewhere. Just like the Hells Angels persuasive control of the drug trade. They have infiltrated the CFSEU in BC.

As for the Red Scorpions, Gary Kang was a founding member of the Brother's Keepers. He's in the original picture with the gang tat he had to get covered when he left. He left before the Hells Angels killed him just like they did the other BK founder Gavinder Grewal. The Hells Angels took over the leadership of BK just like they did the Independent Soldiers and the Death Riders.

People claim when Gary Kang went over to the Red Scorpions, he broke off of the Hells Angels but that's simply not true. He broke off of the Edmonton Hells Angels and went over to the Wolf Pack which was still run by the Hells Angels just a different chapter. Yes he formed BIBO - Blood in blood out, and yes he had his own distribution contacts but he was still tied to Jamie Bacon who was a red and white puppet. Jamie's erogenous claims of standing up to the bikers were ridiculous. They taxed him and he resented it.

The young kids don't understand the pervasive nature of the Hells Angels. The Hells Angels in Quebec have been around a long time. They have survived and thrived controlling the drug trade there for decades. Mom Boucher used Greg Wooley to supply all the crips in Montreal with drugs.

Key members of the Hells Angels are still the problem in BC and the CFSEU are part of it. Riding motorcycles isn't the problem, selling drugs is. IHIT and the CFSEU want the business so they get the budget and can use the events they fostered as an excuse to take away our civil liberty.