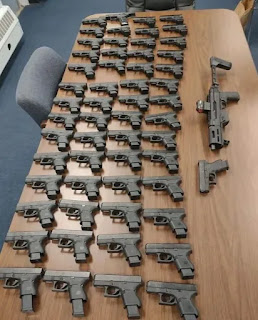 The Tornto Sun is reporting that "An Ottawa man has allegedly been busted with an arsenal of guns after he was nabbed in a small hamlet south of Rochester. Cops claim Badri Ahmed-Mohamed, 36, was arrested Sunday afternoon in Mount Morris, New York after being pulled over for speeding in a routine traffic stop. Officers allegedly discovered the Canadian man was in possession of 58 handguns, along with multiple high-capacity magazines, in a duffel bag in the trunk of his vehicle."

"According to cops, Ahmed-Mohamed was allegedly trafficking the guns across Canada and the U.S. Many of the guns smuggled into Canada are purchased at gun shows in southern states like Virginia and then driven north on the backroads through small towns. From there, they’re sold at huge mark-up to Canadian criminals."

Exactly. This is how the majority of illegal guns come into Canada, from the US smuggled across the border. They don't come from legal Canadain gun owners. Criminals don't use registered firearms to commit crime because they are traceable. These aren't. That's why they're called throw aways. They are often left at the scene of a fatal shooting.

This guy is a Somalian from Ottawa where Damion Ryan was just busted. The Edmonton Hells Angels hired Somalians from Toronto known as the Driftwood Crips to kill Mo in the DTES and bring more violence to Surrey. These criminals work for the Edmonton Hells Angels and the Wolf Pack. Say it like it is. He was busted by US authorities because the CFSEU is compromised. 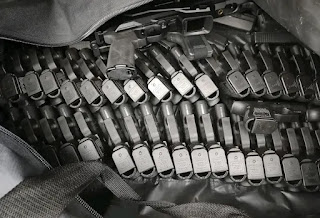 Remember Agent 22? Agent 22 was a member of the Zig Zag Crew who sold crack for the Hells Angels in Winnipeg. He became a police agent. When he came to Surrey in 2009, he met a Hells Angels associate named Eric Sandberg who told him he could get the agent any gun he wanted and that they were ready to eliminate all the competition in Surrey. That was back in 2009.

In 2016 Eric Sandberg was charged with Possession for the purpose of trafficking. He plead guilty March 2018. Police found a bag of guns near 76th Avenue in Surrey on Sept. 17, 2013 that were traced back to a Hells Angels associate on Vancouver Island. Shakerz continues unchecked.