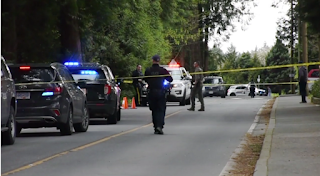 Update: CTV is reporitng that "The man killed in a shooting in Maple Ridge on Thursday has been identified as Arthur Aaron Joseph Comeau, homicide investigators announced Saturday.'

Maple Ridge News is reporting that "A man was shot and killed in Maple Ridge on Thursday afternoon. Just after 2 p.m., emergency responders were called to a report of a man with gunshot wounds near the 21000 block of 124th Avenue. The victim was reported to be unconscious." A witness heard three shots, a pause, and then four more shots. The victim died at the scene.