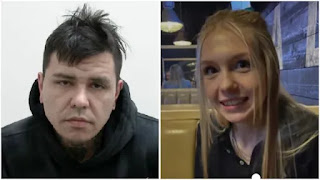 CBC is reporitng that "The death of a 23-year-old Calgary woman last week is being classified as a domestic homicide and police have issued a Canada-wide warrant for the arrest of the victim's former boyfriend, who was once convicted of crimes related to his involvement with the Hells Angels in Manitoba. Gerald Russell Frommelt, 37, is wanted for the second-degree murder of Jamie Lynn Scheible." Tragic. Domestic violence is inexcusable. Real men don't kill girls.

Gerald is described as a former Hells Angels associate in Manitoba so he was never a full patch member. He was convicted of cocaine trafficking in Winnipeg back in 2009 with the Zig Zag crew drug bust and does not appear to be affiliated with the Calgary chapter.

No doubt they will discipline Gerald for unauthorized use of the handgun he acquired and for bringing the club bad press just like they did to Robert Thomas. Sadly, if he was from the Edmonton chapter, those clowns would give him a promotion like they did Dusty Swanson when he should have been stripped. Money doesn't buy respect. Michael O'Farrell would have taken care of Gerald himself just like he did big Vinny for killing his GF.