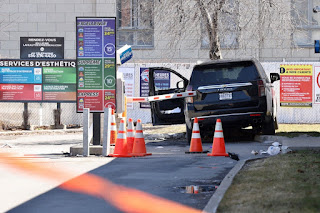 CTV is reporting that "Montreal police (SPVM) say a man has died after being shot near a car wash business in the city's Saint-Leonard borough Tuesday morning. Police officers received several 911 calls at 10:30 a.m. about an incident on Métropolitain Boulevard, near Lacordaire Boulevard. Manuel Couture, a police spokesperson, said a suspect approached the victim and shot him at least once in the upper body near the building before fleeing the scene. One man who lives behind the Lave Auto Express-Eau car wash said the gunfire sounded like it was from a machine gun. CTV News has learned that he was Stephane Dupuis, 51."

La Presse is reporting that "According to our information, Dupuis is close to former Hells Angel Mario Brouillette and has been observed many times by the police in recent years in Italian cafes or in the company of influential members of the mafia." He was also shot Oct 2020 in Laval.