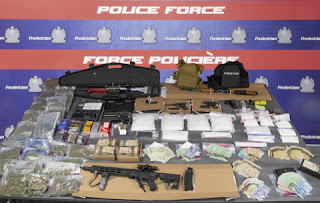 Fredericton news is reporitng that "On April 20, 2022, the Fredericton Police Drugs and Organized Crime Unit executed four CDSA warrants on an apartment in Fredericton, N.B., as well as two storage units and a vehicle. A 40-year old man and 30-year old woman, both from Fredericton, N.B. have been arrested in connection with an ongoing investigation into drug trafficking and are facing a combined 45 criminal charges and 18 Controlled Drug and Substances Act (CDSA) charges. Kaleb Kennett and Tasheen Cloake were both held in custody and will return to court on Monday, April 25, 2022 at 1:30 pm."

I am told that Tasheen has ties to full patch Hells Angel Robin Moulton who was convicted of cociane traficking after police installed a camera in his storage locker which caught Moulton using a hydraulic press to compress a white powdered substance into bricks, placing the substance into clear bags and then into a duffel bag before leaving the locker.

CTV is reporting that "People allegedly linked to drug trafficking by the Hells Angels were arrested early Thursday in Montreal as well as in Sainte-Julie, Brossard and Granby, in the Montérégie region. The investigation has shown overall that the people involved belong to a Montreal-based consortium responsible for supplying cocaine to drug sales networks belonging to the Hells Angels across Quebec. Thursday's operation is linked to the March 15 arrest of Vincent Boulanger, a member of the Montreal Hells Angels, who is suspected of acting as a sponsor for this group." Every province except BC make Hells Angels drug busts.

Posted by Dennis Watson at 2:50 AM