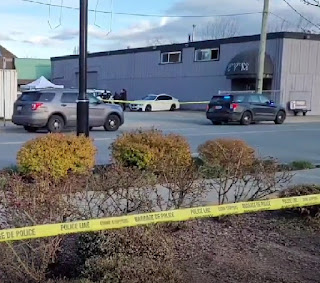 Update: CTV is reporting that "The Integrated Homicide Investigation Team says 41-year-old Darr Khunkhun, of Maple Ridge, was killed outside a gym on Lougheed Highway around 4:30 pm."

The Maple ridge News is reporitng that "A man is dead after a brazen shooting in the parking lot of a Maple Ridge downtown gym Saturday afternoon. According to witnesses, the man was shot as he left Olympians Gym at 22611 Lougheed Hwy. at about 4:30 p.m.. Witnesses reported hearing numerous shots." That's Haney turf.

Any relation to Jujhar Khun-Khun? If he is, one would have to wonder what he was doing in Haney. If he is related it would have been quite disrespectful after Jujhar was involved with the Kelowna shooting that saw Leah paralized. Did he think it was safe just because Spike is dead? Guess what. It's not. I could be wrong but I don't personally believe Jujhar was one of the shooters. I think he was a fall guy because he had nothing to lose after killing his fiancée.