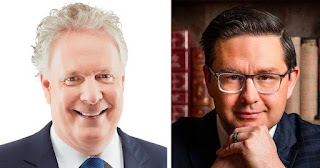 True North is reporitng that "Conservative leadership hopeful and former Quebec Liberal premier Jean Charest attacked rival candidate MP Pierre Poilievre on Friday, saying Poilievre can’t be prime minister if he supported the Freedom Convoy. Charest accused Poilievre of backing “people breaking the laws” and alleged that his support for freedom demonstrators disqualifies him from being prime minister." Another one bites the dust.

That is somewhat disappointing. I had high hopes for Jean Charest. Not any more. The truckers convoy were patriots. If Charest opposes them, then he's not a patriot. I don't know which is worse, Charest opposing the truckers convoy or Poilievre posing with Bill Gates. Looks like both are out. The good news is that Leslyn Lewis is still in. Failing that, we still have Maxime Bernier.

Inspiring today to hear Bill Gates talk about his work with PM Harper to save moms and newborns in developing world pic.twitter.com/BgVm5MHKah