The Irish Republicans use an Easter lily as their symbol to remember the Easer rising in 1916 because it blooms at Easter and is white, green and orange just like the national flag of Ireland. Green represents the Irish Catholics, orange Represents the Irish Protestants and white represents peace between the two. In a free republic, civil liberty is protected by law.

The Irish Proclamation states that "The Republic guarantees religious and civil liberty, equal rights and equal opportunities to all its citizens, and declares its resolve to pursue the happiness and prosperity of the whole nation and of all its parts, cherishing all of the children of the nation equally, and oblivious of the differences carefully fostered by an alien Government, which have divided a minority from the majority in the past." So mote it be. 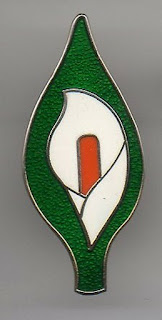 Posted by Dennis Watson at 6:20 AM