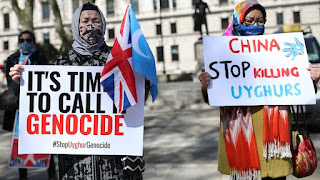 The Fake News is reporting that Canada joins calls to remove Russia from UN Human Rights Council. You mean Justin Trudeau and the World Economic Forum. That is somewhat outrageous. Canada should withdraw from the UN because of Communist China's presence on the UN Human Rights council despite their organ harvesting of political prisoners.

NATO and Zelenskyy provoked a conflict with Russia by putting nuclear missiles and bio labs on their border and their fake news has been lying about Russia and the conflict ever since. What do we really know? We know that the media consistently lies. That is what we do know.