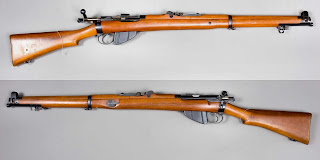 Speaking of Prince George, the Prince George Citizen is reporting that "Martha Mary Joseph to serve 639-day conditional sentence order for June 2018 death of Shauna Sam. According to an agreed statement of facts, Joseph was sitting in the back seat of a car during the early morning of June 21, 2018 when a .303 rifle in her possession went off. Sam was sitting in the front passenger seat, directly in front of Joseph, and the bullet struck Sam in the back. The two women and two men had been driving back to the Yekooche reserve, about 75 kilometres northwest of Fort St. James, after they had gone out to fire off some rounds at a nearby clearing. "

Intentional or not, this is tragic because a woman is dead and she leaves behind a 12 year old son. I don' want to hate because I'm a nobody, but the accidental shooting story is difficult to believe. If it was accidental, it was completely negligent.

The .303 like the .306 and the .308 fires a .30 caliber cartridge. It's a very old British rifle. It's a top feed like the SKS and has a similar shaped cup for the rounds to fit in where a detachable magazine would go on ARs. It's a long gun. Which means if you're sitting in the back seat, it is very difficult to accidentally point at the seat in front of you. It's very cramped and you'd have to squish it in to fit. A hand gun obviously has a much shorter muzzle and is much easier to accidentally sweep in an unsafe direction. That's why everyone ducks for cover when a novice starts flailing with a handgun at the range. The range officer might give them one warning before they are asked to leave. The Hodge Twins have a funny story about that.

It's theoretically possible she was joking around and pointed the unloaded rifle at the seat in front of her but then again that would violate one of the fundamental rules of gun safety: control the muzzle. Always point the firearm in a safe direction. Never point a firearm at someone even if unloaded. You always assume the gun is loaded. You never joke around with a firearm. Ever.

It's like the Alec Baldwin shooting. That one could have been accidental because he is an idiot who doesn't know anything about guns or gun safety. He lied and said the gun went off by itself and that he never pointed it at anyone. If he didn't point it in an unsafe direction, it wouldn't have hit anyone when it went off and it didn't go off all by itself. He had his finger on the trigger when he shouldn't have. Guns don't go off all by themselves.

In the Prince George case, it would be a bit more plausible it was accidental if it was a hand gun as that would be easy to accidentally sweep in an unsafe direction. The rifle had to be a conscious effort because of the cramped space.

Giving them the benefit of the doubt, they could have assumed it was unloaded but it's pretty easy to open the bolt to check. I'd also be interested to know what time of the day it was. People don't go target shooting outside in the night and you never mix alcohol with firearms. Ever.