As we know, James Topp is a military veteran marching from Vancouver to Ottawa in support of the freedoms guaranteed by the Canadian Charter of Rights. He's marched from Vancouver to Calgary and spoke at the Calgary Freedom Rally yesterday. God's speed brother. 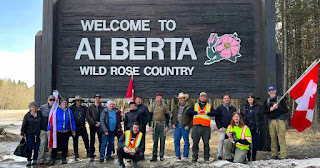 Last year Calgary firefighters held a respectful silent protest at the firefighter memorial in Calgary. As a sign of respect, they each touched the memorial as they walked by. Calgary city council lied and said they desecrated the memorial so they put up barricades around it. These are the unhealthy lies and misinformation they are spreading.

Anybody want to bet that this peaceful protest by front line workers makes it into mainstream media reporting? I didn't think so.