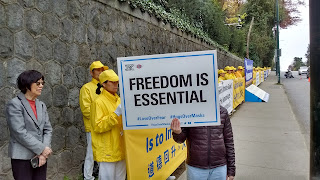 There was a Falun Gong rally outside the Chinese consulate in Vancouver today commemorating the 23rd anniversary of the Communist Party's persecution of the Falun Gong or Falun Dafa. A local freedom fighter joined in. Freedom is essential for everyone including the Falun Gong. I spoke at the rally and while I'm waiting for someone to send me a copy of the video so I can upload it to Rumble I want to address some of the ridiculous lies about the Falun Gong posted online by the Chinese Communist Party and their state run media here in North America.

The Chinese Communist Party falsely declares that the Falun Gong are a cult. They say that to rationalize their torture and murder of Falun Gong practitioners. I can tell you right now that the Falun gong are not a cult and even if they were, that would not justify the Communist Party's torture and murder. When I was young, the moonies were considered a cult because of their invasive brainwashing techniques. Now Communism is a cult for that very reason.

When I first met the Flaun Gong I saw them as fiercely patriotic supporting the ancient Chinese cultural traditions that Communism has banned. They promoted a wonderful cultural event called Shen Yun and I thought why on earth would the Communist Party oppose that. Well this year I notice that their poster said China before Communism and I started to understand. 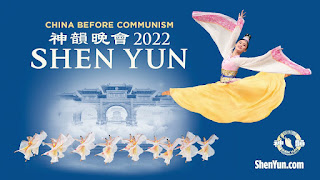 I have always said that China has a magnificent culture and history that predates Communism by thousands of years. Insider dot com, a Chinese State run media outlet in North America ran a ridiculous article trashing not only the Falun Gong but the magnificent cultural production they promote. The article claims that the show is basically propaganda and that "the purpose of Shen Yun is to demonstrate the evils of China's communist party and its beliefs. The show is fervently anti-atheist, anti-evolution, anti-Mao Zedong, and anti-Karl Marx." That's kind of like saying Shen Yun is anti evil. Chairman Mao was a mass murderer. The artcile sates that "The show includes a dance with the organ harvesting, according to the New Yorker."

The article goes on to state that "One of the ways China persecutes Falun Gong, members of the organization say, is by imprisoning its members and stealing their organs. While research reports by governments and NGOs found that the allegations are true, it's not clear if organ-harvesting continues today." Not clear? Maybe we should take a closer look at that.

Of all the ridiculous trash talking the absurd article promotes, you'd think it would give a little more due diligence to the organ harvesting accusations since it is so profoundly significant. Instead they admit yes it was true but there's no evidence it's still being done today. More lies.

They admit that the Communist Party did murder innocent Falun Gong practitioners for the multi billion dollar organ harvesting industry. That admission is of colossal significance. For years the Communist Party lied and said they weren't doing it. Then when they were confronted with the truth, they lied again and said we did it but we've stopped when they clearly have not. Communism is based on lies and so is their state run media in North America.